The campaign against Falun Gong has served as an incubator of persecution tactics now being deployed against other targeted groups in China. 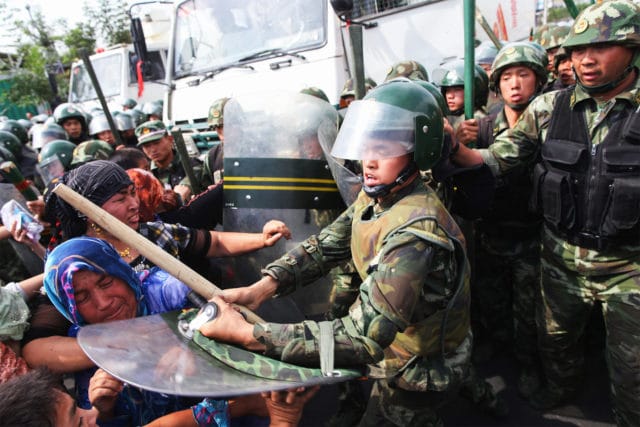 OPTIMIZED REPRESSION Chinese policemen push Uyghur women who are protesting in Ürümqi, the capital of the Xinjiang Uyghur Autonomous Region, China, on July 7, 2009. Hundreds of Uyghur people protested after their relatives were detained by authorities.

For  20 years, CCP officials and China’s security forces have pursued an aggressive campaign against tens of millions of spiritual believers throughout China. Cases of persecution, abuse, and even deaths from torture have been documented in every province.

Various methods of physical and psychological torture have been tested and refined in an effort to force Falun Gong practitioners to renounce their belief and affirm their allegiance to the CCP in a process the Party euphemistically refers to as “transformation.” Trainings have brought officials together to share experiences, and “expert” committees have been formed to perfect abusive practices. Officials overseeing the persecution have been circulated and promoted throughout the country and party-state apparatus.

Today, the lessons learned from these efforts are being applied not only to Falun Gong but also to members of other groups targeted for persecution. Torture methods like the “tiger bench” have appeared in Tibet and in the detention accounts by rights activists. Human rights lawyers have been disappeared for months at a time and threatened with the kind of abuse inflicted on their Falun Gong clients. Legal provisions used for sentencing Falun Gong practitioners are being applied to underground Protestants and other Christians.

Nowhere is this dynamic more apparent than in the current human rights crisis in Xinjiang, where over a million members of Muslim minorities are estimated to be held in re-education camps. In a February 2019 article in the Jamestown Foundation’s China Brief, Freedom House researcher Sarah Cook relayed in detail how Communist Party officials have been applying lessons from prior “transformation” campaigns—most notably the assault on Falun Gong—to repression in Xinjiang. Cook states, “The terminology used in official documents and relayed by former detainees from the Party’s anti-Falun Gong repression is strikingly similar to what has appeared more recently in Xinjiang.”

Moreover, she describes how four key officials influencing events in Xinjiang—at the provincial and national level—“gained first-hand experience with programs directed against Falun Gong earlier in their careers.” Included among these officials is the current Minister of Justice Fu Zhenghua, who previously served as head of the notorious 6-10 Office and visited Xinjiang in 2015 in that capacity.