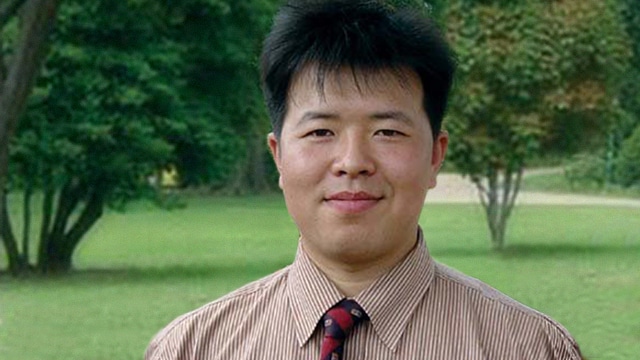 GANG CHEN | After escaping to the United States from persecution in China.

My name is Gang Chen and I am from Marlton NJ. I came to U.S. three months ago from Beijing. I used to be the logistics manager at the Beijing branch company of Carlsberg int’l Corp. I would like to share my personal experience as a Falun Gong practitioner in China.

In June 2000, I was sent to Beijing Tuanhe Forced Labor Camp for 1-year detention without trial, simply because I practice Falun Gong.

In the labor camp, the police guards used a whole set of brainwash methods to force me giving up Falun Gong. The methods they used included threats, lying, propaganda, physical and mental tortures. On one day of September, 2000 I saw police beating and shocking another Falun Gong practitioner named Tiantong Sun with about 10 electric batons simultaneously, because he refused to attend the convention condemning Falun Gong.

One thing that I would like to bring your attention to is that in the labor camp I have seen Chinese state media articles claiming that a certain American anti-cult organization supported the persecution of Falun Gong.

I would never forget the horrible scene: I lay on my bed, in tears, like a dead fish because of the injuries, hearing the horrible screams from practitioners being tortured! I felt like being in hell! But the most painful wound was in my heart!

When I was in labor camp, I was only allowed to sleep for less than four hours a day. In September 2000, they did not allow me to sleep for fifteen consecutive days while doing intense labor work, or enduring physical torture during the day. On one day of October, 2000, a policeman whose last name is Shi shocked me continuously with an electric baton to such a degree that large areas of my arms, neck, head and back skin were burned.

On one day in February 2001, because I refused to slander Falun Gong, the police mobilized a dozen inmates who had given up their Falun Gong practice under pressure to beat me up ruthlessly. Some of them were fellow practitioners whom I knew before. They beat me until my body was full of wounds and my face became deformed. They then taped my mouth and tied me up with my arms behind, forced my body bend forward and tied my head and my legs together. At that moment I was almost suffocated and I felt the excruciating pain in my low back. I almost fainted and felt on the edge of death. This painful torture exceeded my limit of endurance.

Giving in against my will

I collapsed and gave in against my will. I was unable to walk during the next two weeks. Another practitioner named Lu Changjun who suffered the same torture became paralyzed and was never able to stand up again. I would never forget the horrible scene: I lay on my bed, in tears, like a dead fish because of the injuries, hearing the horrible screams from practitioners being tortured! I felt like being in hell! But the most painful wound was in my heart!

Since the persecution, I lost my job and was taken away from my happy family. All I received was humiliation and torture. In addition to physical tortures, these police guards destroyed my confidence and dignity. They forced me to become a person that I despise, tarnished my soul and destroyed my hope. I fell into deep depression. I felt as if a crowd of malicious monsters were making fun of me while torturing me, saying: “you deserve living in Hell! You deserve being humiliated and there will never be an end to it!”

Helplessness… The Darkest Period of My Life

I once promised to follow the principle of “truth, compassion and tolerance,” but I betrayed my consciousness under extreme pressure! I could not imagine how to face my family, friends, and people I know. I did not want them to know that I was a coward. I was suddenly overwhelmed by anxiety, depression and helplessness. I even thought about committing suicide. I have eye-witnessed many former Falun Gong practitioners, after having given up Falun Gong under pressure, beating and cursing others in order to show that they were truly “transformed”. Their behavior manifested the true nature of this persecution – turning good and kind people into violent and cruel perpetrators! I said to myself, “I cannot become one of them. I want to be a good person! Regardless of what happened, I will still follow the principles of “truth, compassion and tolerance”! This thought to some extent smoothed my painful heart and carried me through the darkest period of my life.

In contrast, some people who were brainwashed by these malicious lies have lost their identities totally and became mentally ill due to tremendous pressure. I witnessed six such cases including my friend Zhu Zhiliang, an engineer with a Master degree. He became delirious and could not recognize his parents and wife, and talked nonsense after he came out of the brainwashing labor camp in Feb 2003.

After I was released in December, 2001, the nightmare of my labor camp experience constantly haunted me. I felt dizzy, exhausted, depressed, scared, guilty and helpless. I developed palpitations and insomnia.

Because I became so guilty that I gave into the brainwashing, I was frustrated in my cultivation. I felt shame whenever I thought about Falun Gong. I tried many other ways, such as traveling, sports, reading, etc. to get away from the bad feelings, but I failed. I had even developed hostility against the society. The reason was that I had lost respect and hope for myself. Finally, it was Falun Gong that helped me to regain my confidence and self worth. I take comfort in realizing that I have come back to a peaceful and righteous way of life.

After my release from the labor camp, I was very fortunate to have received an offer for a position with a U.S. company, because of my specialty in import-export related business. That is how I got an H-1 visa and came to the U.S., where I can now talk freely about my experiences. Other practitioners in China are not so fortunate.

I understand that AFF’s job is to help victims of brainwashing. It is indeed a meaningful thing. I believe that all of you treasure lives and protect human rights and justice. I hope that you could help those people who are being mind-controlled by CCP.

Please help us stop this persecution.